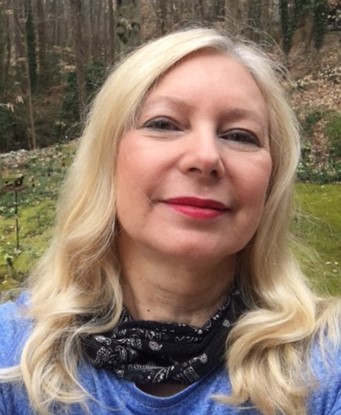 Elma Orr is a self taught artist who has been experimenting in oils and acrylics for almost 20 years. She graduated in Economics/ Business and has a Master in International Economics.

Born in Brazil from Italian, Portuguese and Slavic grandparents who were farmers in Europe, most of her cousins and uncles are still farmers today as they kept the family's tradition passed down to the next generations. As for Elma, she takes pride in her hard yard working and green thumb inherited in her farmer DNA.

In 2005, she quit her career working for an Automotive Company in Michigan and moved to North of Mississippi with her husband and daughter and started painting full time, organizing Art Exhibits and helping the City's Committee in Public Events.

She became an American Citizen around 2007 and has so much appreciation for being a citizen in this Country and is frequently driven, compelled to support her community by volunteering or joining fundraisings, in particular those noble causes such as for the Children's Hospital and war refugee immigrants. Perhaps it has to do with an inner call that she can't avoid, since she knows exactly why her grandparents left Europe in the past.

Around 2009, Elma was a recipient of a grant from the MAC - Mississippi Arts Commission for her successful leadership in organizing art shows, plein air events, thus supporting the Local Artist Community in Grenada and other counties around North of Mississippi.

Elma's paintings have been called as "energetic" , due to lots of textures and color choices. She just paints intuitively, starting from a planned idea of a conception, and ending up with something else, which is basically her feelings of the moment. She can render them in several styles, from the traditional fat over lean painting portrait, to a cubism, impressionism and modern abstracts in oils or acrylics, working with brushes and pallet knives.

Elma artworks have sold to collectors in Mississippi, Tennessee, Florida, Michigan, Georgia, Colorado, Texas and Saudi Arabia. While in Mississippi, among her patrons there were well known local lawyers, doctors, football players, mayors, restaurant owners. She was very surprised when she sold a painting overseas, which was for a grand opening of a Pizzeria in Riyadh, Saudi Arabia.

In 2012, she moved to Dunwoody with her husband and daughter, joined Dunwoody Fine Art Association, and participated in a few local Exhibits.

More recently, Elma has been busy doing Public Art commissions with Dunwoody City Parks and Recreation and some murals for restaurants in Alpharetta and Athens.